Near infrared (NIR) or short-wave infrared (SWIR) sensing in the range from 900 – 2500 nm is becoming ever more important in fields such as machine vision (for food and goods quality inspection and control, plastics sorting), automotive applications (for 3D aerial and geographic mapping, advanced driver-assistance systems at night and adverse weather conditions (mist/fog/snow)), smartphone cameras (for biometrics and 3D photography), AR and VR headsets (for eyes tracking), in night vision and surveillance. Current cameras based on hybrid InGaAs technology have high production costs and subsequently high prices (over $10,000). They also have  narrow sensitivity ranges (up to 1700 nm) and limited camera resolution (<1.36 MP).

QDot™ quantum dots can be monolithically integrated on to  silicon CMOS read-out integrated circuits (ROIC) making them an ideal solution. They are 10-1000 times more cost effective than InGaAs cameras and are thus more economical,  and they can be used to produce high resolution (up to 10 MP) images sensors with broadband sensitivity (300-2500 nm). Read more about basics of this technology and how it compares with other technologies.

The following table illustrates how quantum dot SWIR (NIR) sensor technology compares with traditional and other emerging SWIR technologies. The attributes are selected for their importance in typical SWIR image sensor cameras.

Silicon CMOS is a sensor technology widely applied in current cameras. A Silicon CMOS sensor provides high performance and efficiency in the visible range with EQE up to 80%, extremely low dark current < 1 nA/cm2 and high resolution over 2-10 MP with the typical pixel size 1-3 μm. However, its sensitivity drops significantly in SWIR range (beyond 800 nm). It is possible to extend the sensitivity range up to 940 nm with EQE 36-50 %, but the further sensitivity extension toward longer SWIR band is limited due to intrinsic properties of the silicon that has the full absorbance cut-off at 1100 nm. (References: [1], [2], [3], [4]).

There are a few technologies enabling SWIR sensing. Among the well-known ones is InGaAs hybrid CMOS technology that operates in the range of 400 – 1700 nm. The sensor consists of an array of epitaxially grown InGaAs layer. Each pixel of InGaAs array is connected with the corresponding pixel from silicon CMOS read-out integrated circuit (ROIC) substrate via soldering bump bonds. Despite of the impressive characteristics of the sensor in terms of high EQE > 75% and low dark current < 10 nA/cm2, the complicated device structure and fabrication result in low scalability, high cost (over 10,000 USD) and limited resolution (less than 1 MP resolution with the typical pixel pitch is around 15-20 μm).  The recent progress in reducing the size of the pixel pitch to 5 μm (resolution 1.37 MP), the price for such camera is increased even more. These limitations simply do not allow high scale production of SWIR sensors, hence hinders their mass adoption. (References: [5], [6]).

In searching for alternative affordable solutions, the SWIR sensor technology progressed towards the fabrication of the monolithically integrated silicon CMOS. One alternative that has appeared is plasmonic technology. It includes the deposition of the thin layer of metals, such as Al, on top of a silicon substrate. Due to plasmonic effect in the metal-silicon interface, SWIR light generates photocurrent. However, the plasmonic technology has inferior performance in terms of low EQE (below 1-2 %) and high dark current. Another technology is Ge on silicon. It involves the deposition of Ge on top of silicon that enables to detect the light from 400 to 1550 nm. But it leads to even higher dark current due to non-homogeneity of the interface between silicon and germanium. (References: [7], [8], [9], [10], [11], [12]).

One of the most promising monolithic technologies is based on quantum dots, which offers impressive benefits over the outlined above technologies. Quantum Dots are nanoparticles of semiconductor materials with unique optoelectronic properties. QDot™ quantum dots can be dispersed in various solvents and simply printed on a silicon CMOS readout forming quantum dot stack.  Quantum dots-based SWIR sensors demonstrate high EQE up to 60 %, low dark current < 10-100 nA/cm2 with the pixel pitch below 2 μm (with the resolution over 10 MP). One of the unique features of the technology is the tuneability of the sensor sensitivity over a broad range from 350 nm up to 2500 nm by simply changing the size of quantum dots. Quantum dot technology promises a substantial cost reduction of the SWIR sensors and cameras (100-1000x times comparable with InGaAs sensors, for example), and potentially can be the cost of the conventional silicon CMOS sensors. Quantum dot technology is able to make SWIR sensors affordable bringing the SWIR industry to mass adoption in machine vision, automotive and consumer electronics. (References: [14], [15], [16], [17], [18]).

Contact at [email protected] to discuss your needs in enabling your next generation SWIR image sensors with quantum dot technology.

The SWIR image sensor with QDot™ Quantum Dots can be made using various different structures: 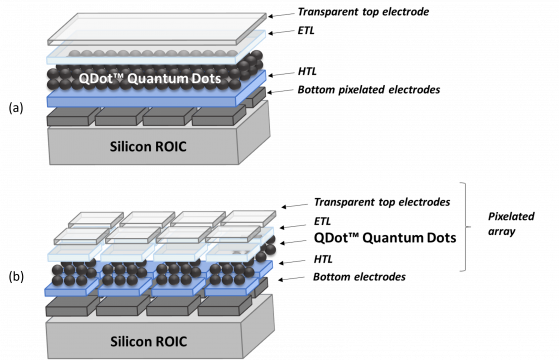 The principle device structure consists of several thin layers of film (a so called QDot™ stack) on top of a silicon ROIC substrate.  Working from the bottom up, the structure has a bottom electrode, an HTL (hole transporting layer), QDot ™ Quantum Dots, an ETL (electron transporting layer), and finally a transparent top electrode. The device pixelation can be performed in various ways; (a) or (b). In type (a), the pixelation is performed on the bottom electrode level. In type (b), the pixelation is performed on the whole QDot™ stack level using etching techniques.

These sensors are easily integrated into various devices, from machine vision and automotive cameras to consumer electronic devices: mobile phones and AR/VR glasses.

The process of integrating quantum dots into a silicon CMOS ROIC includes several steps which are illustrated below: 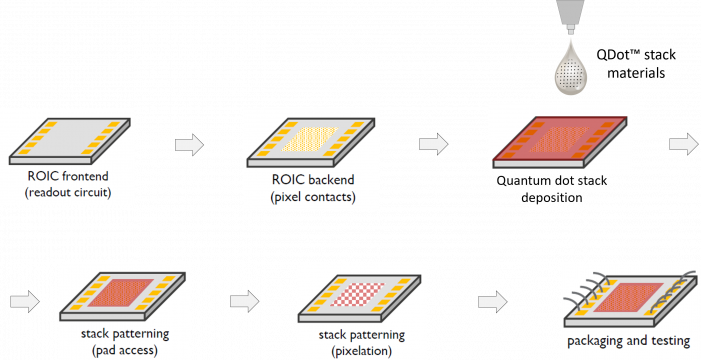 At the core of the whole process is quantum dot stack deposition. During this process, quantum dots and transporting layers/electrodes are deposited on the CMOS ROIC. This forms SWIR image sensor pixels with the following photodiode architecture:

There may be some variation in the deposition and pixilation techniques depending on the type of the SWIR image sensor architecture, (a) or (b). Below is the description for type (a) architecture:

There are several steps involved in quantum dot stack deposition.  The first step is the deposition of the hole transporting layer (HTL) on a ROIC substrate (with the bottom electrodes). This is done using spin-coating. The second step is to spin-coat with QDot™ quantum dots; these form the main active layer of the stack. There are two ways to depose quantum dot layers.  The first is the “solid ligand exchange” method. It involves spin coating of a layer of quantum dots coated with organic ligands (for example QDot PbS quantum dots with oleic acid). This is followed by a spin-coating of a layer of solution containing exchanged ligands, which aims to make the previously deposited QD film conductive. Finally a layer of washing solvent is added to remove unreacted ligands. Typically, these cycles are repeated 5-15 times to achieve the target thickness of the QDs layer, which is normally around 200-400 nm (look at this video how to perform the solid ligand exchange).

Another method for QDs deposition is to add layers of quantum dots coated with conductive ligands (QDot™ PbS quantum dots ink). Typically, a 1-2 layers added by spin coating are enough to make the films 200-400 nm thick.

The next step is to add the ETL (electron transporting layer) using spin coating techniques, before finally using thermal evaporation to add  the transparent top contacts and using masks to pattern and pixelate the sensor to achieve the required pixel pitch size (from 1.5 – 20 um).

Typically, all the deposition steps can be performed on a silicon wafer level (200 or 300 mm wafer). As  quantum dots can be monolithically integrated on to silicon CMOS read-out integrated circuits (ROIC), they are an ideal solution.  They are 10-1000 times cheaper than InGaAs cameras, and they produce a high resolution (up to 10 MP) image sensors with broadband sensitivity 300-2500 nm.

Quantum Solutions collaborates with Emberion and supports the development and supply of customised QDot™ SWIR Quantum Dots for their VIS-SWIR VGA camera. Contact us to learn more about this camera. 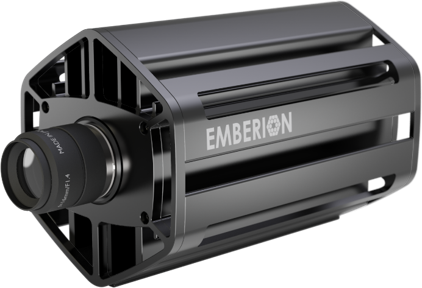 Learn more about QDot™ SWIR camera developed by collaboration efforts between Imec and Quantum Solutions. Contact us to learn more about this camera.